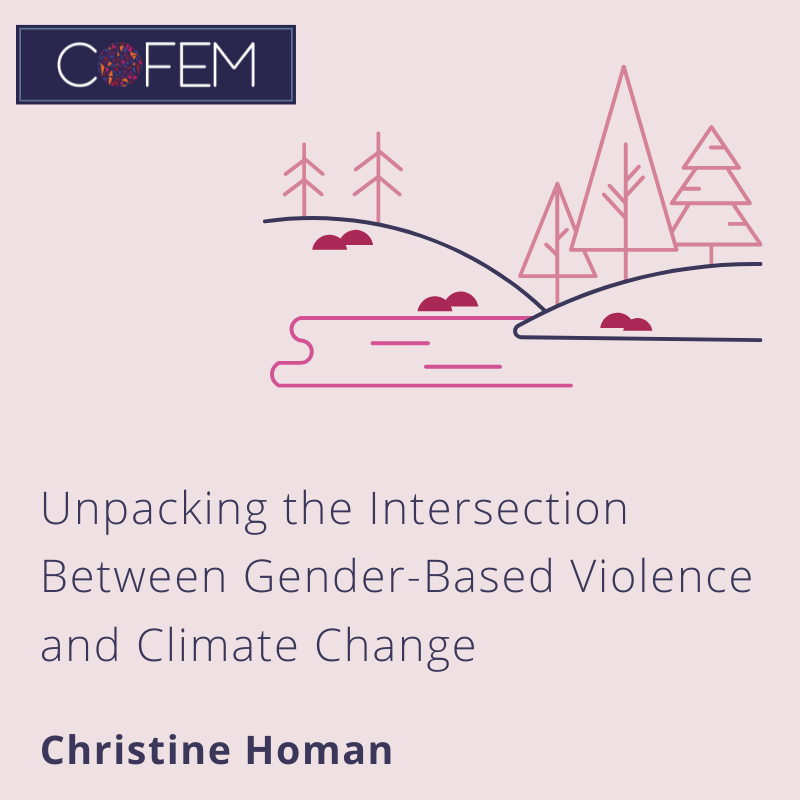 Feminists have long explored how gender impacts nearly every area of life, but there are some areas in which the connection is less understood. The relationship between gender-based violence (GBV) and climate change is one of those. This article argues that there is strong foundational evidence that GBV and climate change are interconnected, but more research is needed to understand the connection entirely.

A few groups have started this discussion. The International Union for Conservation of Nature has highlighted three main ways that gender and climate intersect:

We also see many examples of women leading environmental causes around the world. In many places, women are primarily responsible for the day-to-day lives of their families and communities. When climate change and exploitative practices threaten local resources, women are forced to step up and address the problem. Recognizing the different impacts climate change has on women and ensuring their voices are represented in decision-making will be vital to ending the climate crisis.

In the Americas, activists argue that a link has been established between “resource extraction projects and violence against Indigenous women and girls.” As Delee Nikal, a Wet’suwet’en activist, put it, “femicide is directly linked to the ecocide.”   In these communities, it is evident that women experience negative impacts in ways that men don’t. Activists detailed how women were often targeted for violence when they spoke up against these projects.

In Indonesia, women led a year-long protest against mining on Timor Island. For many years mining companies had come to the island and stripped it of its natural resources, with little regard for the impact on the environment and people who lived on the island. Seeing its impact on her community, a local woman, Aleta Baun, affectionately known as “Mama” Aleta, brought together a group of local women and successfully led a year-long protest to get the mining companies to leave.

In the Adivasi communities of India, the women are leading efforts to fight climate change. The results are showing. In Odisha, the Bonda tribe have begun using more traditional millet varieties that are more resistant to heavy rainfall.  “Women farmers played a key role in seed identification, collection, selection, preservation, and storage of the local resilient varieties,” said Jagannath Majhi, Khairput-based Adivasi youth leader.” These efforts have resulted in increased yield and increased value of millet produced per farmer.

This evidence shows that the impact of climate change on women and gender-based violence is a complex problem that requires all causes to be addressed if we are to solve it. Solving the crisis will mean evaluating not only technological and industrial causes but also social causes. The perfect technological solution means nothing if social norms prevent it from being used by the people who need it. Human beings implement policies and practices. If the full range of humanity is not represented in the decision-making, planning, and implementation stages, they will not be effective.

To fully understand how climate change and feminism are related, we also need to move beyond the framing of gender-based violence as only intimate partner violence or harassment. We have to understand that climate change affects women in ways that negatively impact their health and well-being in ways that men are not affected. The difference in impact varies based on location and economic and social factors but can be seen worldwide. More research is needed to fully understand the full scope of the relationship between gender and climate change. Still, there is already one, and addressing it is key to saving the environment.

Moving forward, we need to start to answer the following questions:

Building on the information we already have will enable us to effectively tackle GBV and climate change.