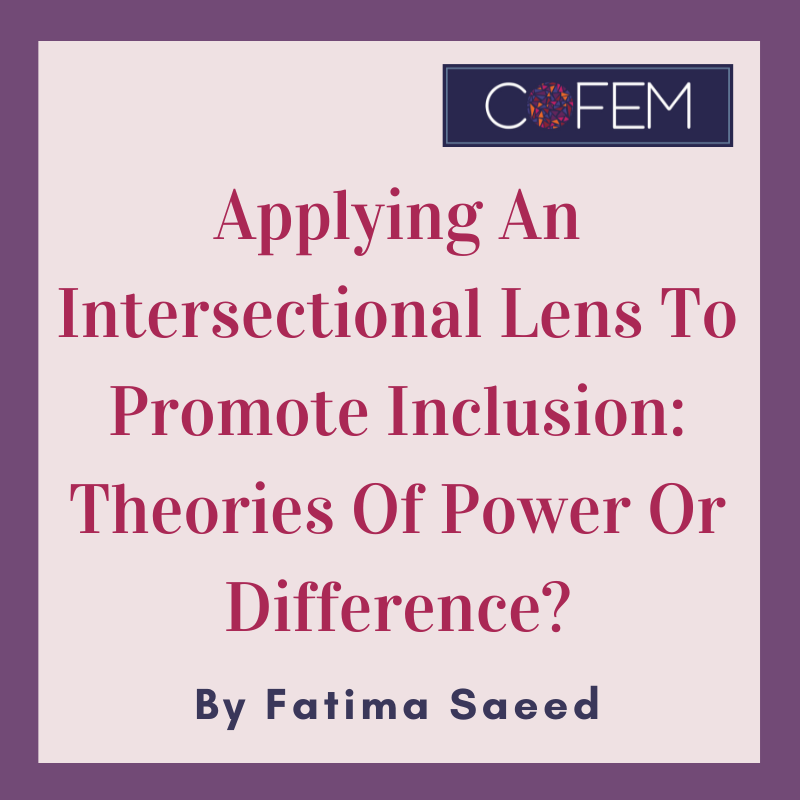 Note: This blog is based on a presentation given by Fatima Saeed at the SVRI Forum held in Cancún, Mexico, in September 2022.

My name is Fatima Saeed, a brown-migrant, Pakistani-Muslim feminist activist representing the membership of the Coalition of Feminists for Social Change (COFEM), an advocacy collective of thought leaders, activists, practitioners, and academics working globally to end gender-based violence.

I mention my intersecting identities because for many young millennial feminist activists like myself at the frontlines of the women’s rights movement; intersectionality has been a God-send – an analytical framework that helped us situate and navigate our struggles as women of color growing up in post-colonial capitalist societies and working in patriarchal, often white-supremacist institutions. Black feminism’s expression of intersectionality has provided a much-needed break from white-centric, single-axis interpretations of race and gender.

Intersectional feminism continues to be a vital tool for activism, helping us reconcile intersecting identities and build alliances. Yet, in the recent past, there has been concern that what emerged as a strong expression of feminist theory and practice is being co-opted and misinterpreted.

We have ample grounds to be wary. The depoliticization of feminist theory is nothing new – we’ve witnessed this process unfold with other frameworks. It is often characterized by 1. decontextualizing the concept from the historical context, which led to its adoption, 2: applying an apolitical lens that celebrates difference and overlooks power; and lastly, promoting inclusivity without asking the questions which make us uncomfortable. Who is oppressed by the existing gender order? Who benefits from gender inequality and violence against women and girls? In whose interest is it to maintain the status quo?

One of these concepts is gender mainstreaming, conceptualized as the main public policy tool at the Fourth World Conference on Women in Beijing 1995, to center the interests of women and girls in public policy. While its application has led to many positive outcomes over the last two decades, specific interpretations of the concept promote a ‘gender sensitive’ approach to gender mainstreaming rather than a gender transformative approach, delinking gender from the hierarchy that exists between men and women. Such a neutralized interpretation reduces the analysis to ‘what one group has the other must-have too,’ rendering it ineffective in addressing gender power imbalances.

Similarly, development programming has increasingly shifted towards a broad protectionist agenda that applies a lens that is ‘inclusive’ of all at-risk groups. Such a wide lens can obscure the needs of women and girls and conflate the root causes of the various forms of violence faced by different groups. For instance, violence experienced by men and boys does not stem from structural gender discrimination. When the language of intersectionality is used to argue for the inclusion of male survivors in GBV programming, you conflate differential root causes of violence for males and females and undermine efforts to address violence against women and girls.

So how can we ensure that intersectionality does not meet the same fate as the aforementioned concepts? To avoid flawed interpretations of intersectionality, we must apply an intersectional lens in a way that unpacks the differential roots of violence and uses that to help us understand how violence manifests – in terms of types, drivers, perpetrators, and relationships to perpetrators as well as physical, social and legal consequences. Flawed applications of intersectionality and inclusion promote competition instead of collaboration. They undermine coalition building and fail to transform gender inequality and achieve social justice. At its worst, it further escalates inequality and causes harm to those who are most in need of help.

Any application of intersectionality leading to the inclusion of groups who historically and currently enjoy systematic privilege does not do it justice. Applying intersectionality in its true spirit means including and centering the experiences of women and girls from different backgrounds – women with disabilities, women from ethnic minorities, black and brown lesbian women, and many others. Most importantly, we must remember violence against women and girls does not happen in a vacuum. Somebody benefits from it. If the beneficiaries of gender inequality and perpetrators of violence against women benefit equally from your programming under the guise of ‘inclusion,’ you are doing intersectionality wrong.

For more information on these issues, see COFEM’s Feminist Pocketbook at www.cofemsocialchange.org.