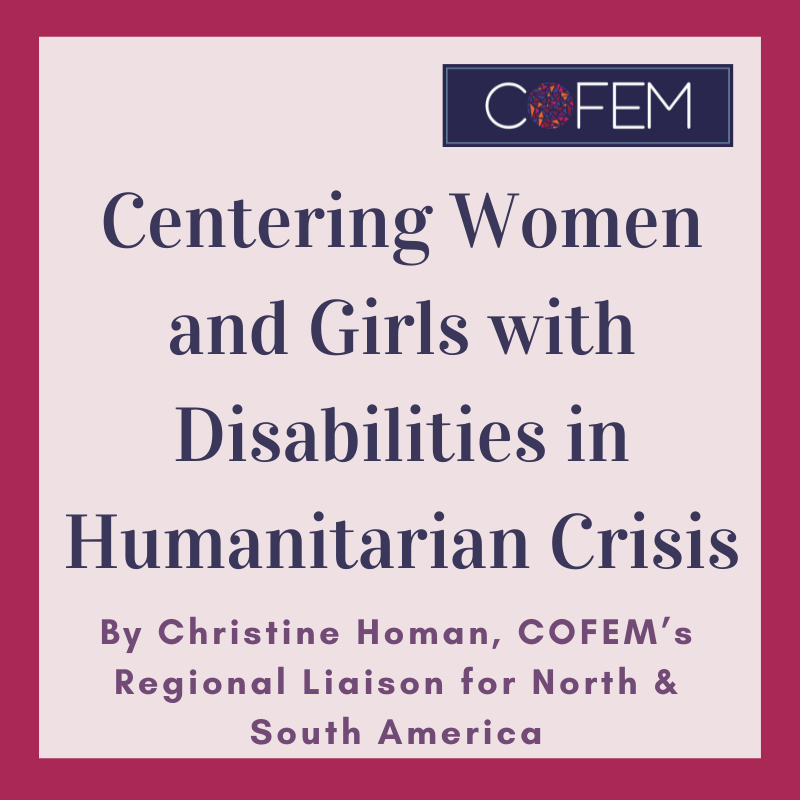 Intersectionality is one of the most essential frameworks in feminist circles. This concept draws attention to the ways in which different aspects of our identities interact and impact the way we move through the world, specifically in relation to our gender identity. The term was coined by Kimberlé Crenshaw and was born from the discussion of how race and gender interact, but it has since evolved. Crenshaw said: “Intersectionality is a lens through which you can see where power comes and collides, where it interlocks and intersects. It’s not simply that there’s a race problem here, a gender problem here, and a class or LBGTQ problem there.”

One of these intersections that demands more attention is the relationship between disability and gender. The United Nations Office for the Coordination of Humanitarian Affairs reported, “In disasters, the mortality rate for persons with disabilities has been recorded as two to four times higher than that of persons without disabilities.”  This clearly indicates the needs of people with disabilities are not being met. We see the impact of this lack of attention in several ongoing crises.

In a statement to the Human Rights Council, Nada Al- Nashif, UN Deputy High Commissioner for Human Rights, said, “According to We Decide, a UNFPA-led initiative, between 40 and 68 percent of young women with disabilities experience sexual violence before the age of eighteen.” This statistic is horrifying and does not even discuss how this can be affected by the humanitarian crisis.  Although these examples are bleak, organizations are working on these issues and providing guidance to better support people with disabilities.

A 2019 report from Humanity & Inclusion – Handicap International (HI) and the International Disability Alliance (IDA) stressed that “Deliberate and proactive action in all phases of the humanitarian response is required to ensure that persons with disabilities from all constituencies are systematically included and meaningfully participate in disaster risk reduction (DRR) and humanitarian preparedness, response, and recovery.” We at COFEM would add that given the disparities shown above, the needs of women with disabilities must be addressed as well.

Seeking to understand the unique needs of women and girls with disabilities in humanitarian crises and then intentionally working to meet those needs will increase the safety of an extremely vulnerable group. From what we know, this action cannot wait.