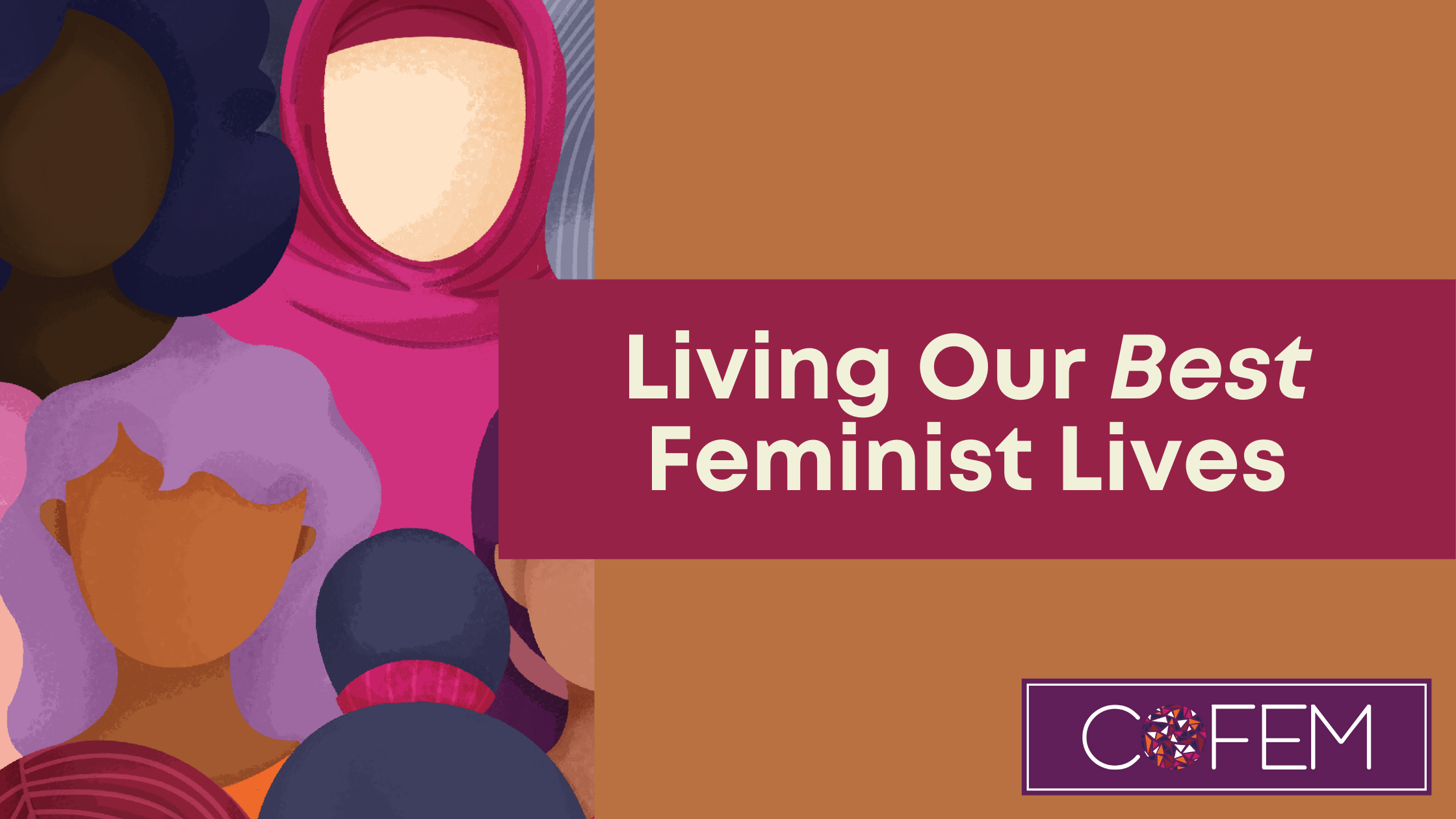 We’ve all experienced that moment – the one where someone says something like, ‘But why do feminists have to be so angry all the time? Or, ‘I’m all for women’s rights, but why do feminists hate men? What about the men?’ And my personal favourite, ‘I prefer to call myself humanist, because I believe in the rights of all people.’ The question: ‘Why should we be feminist?’ always seems to come up. Notwithstanding the gains made in some countries, such as the right for women to vote, the right to view non-consensual sex in a marriage as rape, the right to terminate unwanted pregnancies, it is still a term with negative connotations. We spend so much time trying to call out the overt and subliminal ways in which inequality rears its ugly little head, in trying to live good feminist lives. At times, we’re not always aware of the toll this takes on us. If you’re on a journey to living your best feminist life, then I’d like to suggest that you high five yourself, wherever you are. More importantly, can we acknowledge that there are going to be moments when we mess things up? And that that’s OK, as long as we are on a journey of introspection and building our feminist consciousness?

In 2011, Caitlyn Moran wrote a book called, ‘How to be a Woman.’[1] In it, she says, ‘Put your hand in your pants. Do you have a vagina?’ This is followed by, ‘Do you want to be in charge of it?’ If you answered yes to both questions, her argument is, ‘Congratulations, you’re a feminist.’ While this was a catchy, clever way of making feminism populist and accessible (the book was a tremendous success and many people related to it), it is, of course, not without its problems. The most obvious being the reinforcement of the idea that you have to have a vagina to be feminist. The second being the fact that the book is centred on heterosexual notions of what it means to be a woman. Heteronormative frameworks have long sought to create a uniform understanding of gender identity and its associated notions of ‘womanhood’ and ‘manhood’ have been fraught with problems. For one, they are binary subject positions that shut down a range of different ways in which people identity. Subject positions in terms of how we identify are not static, they are fluid and change over time. How we construct our identities has to intersect with the politics of our other subject positions – our race, culture, spatial location, sexual identity and ableness. It has to be receptive to ongoing debate and evolution. There are many ways in which identity can be constructed. Intersectional feminism has to take cognisance of the different ways in which different sites of inequality intersect, leading to unique forms of discrimination. A bifurcated system of sex/gender fuels hierarchical constructions of the politics of difference. It shuts down, for example, the ways in which trans-gender, gender queer, gender non-conforming and non- binary persons have sought to articulate their experiences of discrimination.

Feminism as a profound personal transformation

Sandra Barky (1993)[2] describes the process of becoming feminist as a profound personal transformation involving both changes in behaviour and changes in consciousness. The process of becoming feminist is not an end state, a place we reach and then sit back as ‘having arrived.’ On the contrary, it’s an ongoing process, filled with moments of complexity, anguish, self-doubt, elation, clarity, a sense of coming home. It entails the development of a multiplicity of feminist consciousness, derived from our involvement and interpretation of different situated experiences. It is a personal journey where we look both within ourselves and outside at the world in which we live – where we take stock of the bigger picture. This necessarily entails a focus on the structural and systemic issues that affect us as a community, as a society, as a multi-national global community. In locating ourselves in the world context in which we live, we necessarily have to think about issues such as the relationship between race, class, gender and sexual orientation in relation to power and privilege. The issue of social inequity is at the heart of feminism.

It’s OK to be a ‘bad’ feminist at times

Feminism is personal in the sense that it calls us to redefine our values and principles and to change our lives accordingly. Sometimes though, in trying to live our best feminist lives, we mess up. And that’s part of the journey. Roxane Gay[3] sums this up best when she says, ‘I embrace the label of bad feminist because I am human. I am messy. I’m not trying to say I’m right. I’m just trying to support what I believe in, trying to do some good in this world, trying to make some noise with my writing while also being myself.’ Gay reminds us that we may well love pink. We may even, at times, ‘dance our asses off to music that we know is terrible for women.’ This is to be expected, we are a movement powered by people and people are fundamentally flawed. It is important to remind ourselves that we won’t always get it right. It will never be possible to reconcile all our feminist values and aspirations with every single aspect of our lives. There is little point in berating ourselves for the small, inconsequential things that we do that may well emanate from institutionalised patriarchy. The point is that we stick with the principles of the feminist movement and do our best in living a good feminist life while recognising that there are many different kinds of ‘feminisms.’  As a movement powered by people, feminism is always going to be accentuated by different views and at times, even by contradictions.

Taking a stand against the co-option of feminism

In the last few years, some significant gains have been made in making feminism more visible and ‘in your face.’ Partly, this can be attributed to campaigns like the #metoo movement. Importantly, it is a result of the work of feminists across the globe in demanding to be heard. In her controversial book, “Why I am not feminist,’ Jessa Crispin argues, that the increasing populism of feminism has not been without its problems. Her critique centres around notions of ‘lifestyle feminism’ where women are encouraged to develop themselves as a conduit for moving up the corporate ladder, giving rise to aspiring ‘feminist’ CEOs. Many of these women build their empires riding the coattails of feminism and are then found to be lacking in terms of creating a work culture that seeks to address gender inequity.

Equally problematic has been the co-option of feminism as a political movement to sell products and people. This populist branding of feminism has seen the proliferation of a consumerist element, with feminist t-shits and expensive scarves with slogans like ‘radical feminist’ being the new ‘in’ thing. Lifestyle feminism has benefited both the capitalist enterprise and women in patriarchal structures of power where the emphasis is not on feminist ideals, but on the pursuit of money and privilege. What we lose in this is the notion that feminism is a political movement, premised on challenging structural inequality. The notion of lifestyle feminism has placed an emphasis on the individual at the expense of the collective. In focusing solely on building our sense of self, we lose sight of the structural, systemic discrimination that enables groups of people to be socially and politically marginalised.

The biggest danger with lifestyle feminism is that it has diluted the political agenda of feminism. If we are serious about bringing about social change, then there are going to be moments when we have to be radical. When we have to be angry. When we have to use threats. When we have to be ‘nasty’ as in President Trump’s choice of words. We will be called upon to be ‘nasty’ as part of an effort in creating a world that it is less nasty. Significant social change like the right to vote, the right to abortion, the right to define sex without consent in marriage as being rape, all came about as a result of radical thought and action. We cannot stick as close as possible to the status quo and hope to bring about fundamental change. So, at times, we will have to sit comfortably in the discomfort of having to challenge the status quo. And when we do, we will have to reach out to each other for support, in riding the wave when things get rough.

Written by COFEM Member, Joy Watson. Joy is a feminist researcher and writer. Her area of expertise is in monitoring government service delivery and analysing public policy in relation to building social equity. Joy has over twenty years’ experience in working closely with policy makers. She has worked extensively in analysing the effects of legislation and public policy in terms of its gendered impact and in advising policy makers in this regard. She has also worked closely with civil society organisations in developing feminist critiques to public policy, specifically in publishing studies on violence against women and in tracking government budgets to address violence against women. Joy has served as advisor to political delegations at international forums and on research advisory teams, including as technical advisor to university studies, as well as to UN-Habitat, UN Women, UNDP and UNFPA studies. She has also been involved as a researcher in global studies. Together with Amanda Gouws, she has published a collection of feminist essays on the global women’s marches, ‘Nasty Women Talk Back,’ (Imbali, 2018). Joy has an MA in Gender Studies and is currently a PHD candidate in the Political Studies Department at Stellenbosch University.

Feminism, Feminist Activism, Feminist Principles, Intersectionality, Why should we be feminist, Young Feminists