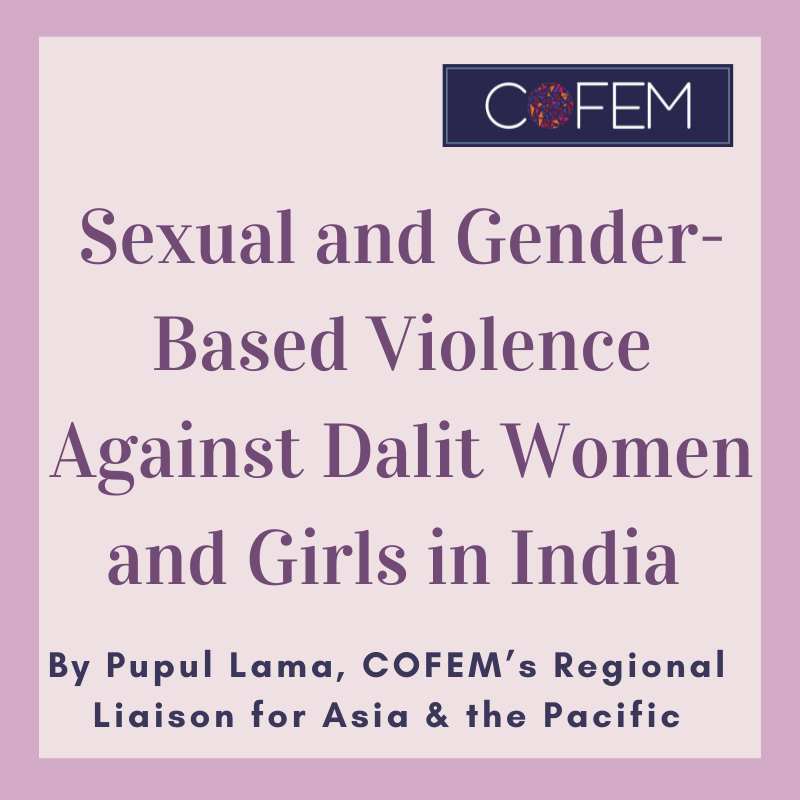 Historically and culturally, Dalit women have been disproportionately subjected to inhumane treatment and gender-based violence (GBV) in the form of sexual exploitation, abuse, and harassment (SEAH) by those from oppressor castes and by those within their communities. However, since caste, patriarchy, and gender power relations prevail in India, Dalit women and girls are predominantly targeted by men belonging to the oppressor caste. Often, these caste-driven atrocities are perceived as a message to dehumanize Dalit women and “teach the entire Dalit community a lesson.” As a result, the already entrenched narrative that women must remain subservient to the caste-assigned conduct and norms is further reinforced subtly and overtly by society.

The Dalit women have been systematically positioned at the lowest of India’s caste, class, and gender hierarchies since time immemorial. Further compounding this are the incidences of gender-based violence (GBV) against Dalit women that fundamentally undermine their social, economic, political, and cultural rights. Their struggles extend beyond caste and GBV to encompass significant facets of the society like economic deprivation and social exclusion that largely stems from the overlapping and intersectional differences. For instance, differences in language, religion, class, sexuality, disability, identity, ethnicity, and other factors, invariably relate to gender.

Human development indicators in India such as literacy, longevity, occupation, etc., demonstrate that Dalit women are ranked worse than Dalit men or other non-Dalit women. Thus, representing the intersectional nature of inequalities that Dalit women are subjected to along with the specific problems they encounter in the form of caste discrimination, economic deprivation, and gender oppression. By applying an intersectional approach, the present article sheds light on the complexities of the systemic violence that Dalit women experience in India. Further, this article also examines caste oppression of Dalit women and its association with various forms of violence, including but not limited to GBV.

Despite the practice of “Untouchability” being abolished in India in 1950 with the introduction of the Indian Constitution vide Article 17, the caste system continues to prevail as the longest surviving system of social discrimination against Dalits.

As recent as September 2020, the news of the gruesome gang rape and murder of a 19-year-old Dalit woman perpetrated by oppressor caste men in Hathras, Uttar Pradesh, sent shockwaves across India and stirred the conscience of the people. The brutal details of the Hathras case brought attention to the duality of the pervasive misogyny and deep-rooted casteism patterns and practices in India. Further, the nationwide demonstrations and fiery clashes fueled a national debate on the rampant caste-based sexual violence against Dalit women and girls in India.

Violence Against Dalit Women in India

Out of 200 million Dalits in India, 50% are women who disproportionately suffer from caste oppression and GBV. National Crime Record Bureau reported that every day at least ten Dalit women are subjected to rape in India. Additionally, between 2009 and 2019, the incidences of rape of Dalit women increased at a disturbingly high rate of almost 159%. However, this is just the tip of the iceberg – the majority of these cases are underreported for numerous reasons, including social stigma, political pressure, fear of retaliation, and the prevalent culture of impunity, especially when the perpetrator belongs to a ‘dominant’, oppressor caste.

Uma Chakravarti, a feminist historian, studies and categorizes the oppression of Dalit women in three ways wherein they are subjected to – caste oppression by the oppressor castes; class-based oppression as laborers by the landowners belonging to the middle and upper class; and patriarchal oppression by all men, including those from their caste. The triple oppressions of Dalit women are compounded by destitution, being women, and being Dalit women. Numerous sociologists and scholars, including Sharmila Rege, place the onus of the systematic degradation of the status of women on both Manu, the lawgiver of Hindu, and Brahmanism, i.e., the Vedic and Vaishnava traditions. One of the rules that depict the degenerating status of women in Manusmriti is V.147, “In childhood, she should remain under the control of her father, in youth under that of her husband, and on the husband’s death under that of her sons; the woman should never have recourse to independence.”

A significantly high percentage of Dalit women and girls are uneducated and socially excluded from their civil and political rights, forcing many into exploitative and violent circumstances. Additionally, their socio-economic and cultural vulnerabilities exacerbate their exposure to GBV by those from oppressor castes. Therefore, it is pertinent to acknowledge the intersections between caste, class and gender, and examine them from an intersectional feminist lens.

It is crucial to recognize the pervasive caste system as a product of sustained endogamy (marrying within the caste) that essentially sets orthodox rules and conduct for all Dalits, especially women, to ensure the continuity of caste-based marriages and gender inequalities. Notably, the structure of marriage, reproduction, and sexuality is the cornerstone on which inequality perpetuates in the caste system. For instance, the caste system subordinates Dalit women’s bodies, sexuality, and reproductive choices by forcing them to practice endogamy through enforced widowhood and child marriage. Those women who dare to challenge endogamy and other harmful caste norms experience brutal retaliation in the form of SEAH.

The feminist research indicates that violence in the form of ‘caste privilege’ occurs due to the upper caste hegemony wherein men assume autonomy over Dalit women’s bodies and sexuality. This ideological hegemony of the caste-gender connection maintains caste boundaries and legitimizes GBV against Dalit women and girls to preserve the ‘purity of caste.’ In the Brahmanical sense, severe forms of sexual violence such as gang rape are often viewed as a weapon by the oppressor caste males to reinforce caste hierarchies and exercise power by collectively stealing the honor of Dalit women and their communities. Equally horrifying is the plight of Dalit girls who also become victims of SGBV through heinous caste-driven religious practices such as the Devadasi system, i.e., female prostitution in temples where they are forced to offer sexual services with religious sanctions.

Dr. B.R. Ambedkar, a social reformer and Dalit activist, articulates that the assertion of caste power deepens the caste system and encourages those from oppressor castes to control Dalit women and their sexuality. Moreover, he challenges the caste system in his paper, “Castes in India,” and offers insight into the sociological relationship between Brahmanism and patriarchy. Sociologists, political scientists, and even feminists initially disregarded his compelling yet original contributions concerning the enforcement of endogamy. Nevertheless, his notions are commemorated by the Dalit musical groups in India and later proclaimed as a feminist stance on caste in India.

Dalit women and girls from other caste-affected South Asian countries also face various forms of violence. However, many of the abuses are country-specific. Such as in Pakistan, incidences of forced marriage and forced religious conversion are imposed on hundreds of Dalit women and girls. While in Nepal during post-disaster reconstruction, the marginalized Nepali women undergo appalling experiences of violence in the form of alcoholism, substance abuse, suicide, and prostitution. These incidences are more prominent among Dalit women who experience institutional violence during post-disaster settings, such as an earthquake, where they do not receive access to adequate dignity kits, humanitarian aid, and safe spaces for rehabilitation. Often, the rehabilitation processes fail to comprehend the intersectional vulnerabilities experienced by Dalit women, and this becomes a part of the problem. Thus, it is imperative to adopt an intersectional approach where Dalit survivors of GBV are aware of their legal rights and receive secure avenues to demand justice.

In the last decade, feminist scholars and activists found it imperative to reconceptualize the structures and practices of Brahmanical patriarchy by engendering the process of studying caste oppression in India. The failure to recognize the structural and institutional violence faced by Dalit women prompted the women’s movements to make an effort to initiate dialogue and solidarity between Dalit and non-Dalit feminists to acknowledge the mounting incidences of violence against Dalit women and girls. The recognition of these intersections interrupted the conventional and/or caste-blind concentration on larger social issues (such as dowry deaths) that were more relevant to those falling within the caste system than those outside it.

To individually and collectively support Dalit women and girls, it is crucial to develop a framework that tackles intersecting inequalities and addresses the specific needs of women experiencing poverty, violence, and discrimination due to their identity and gender. To do so, the government must recognize the presence of systemic and institutional gender relations that underpin patriarchy and masculinity in Indian society. To ensure that the intersectional vulnerabilities and lived experiences of Dalit survivors are addressed and investigated in a dignified way from a human rights approach, the government should adopt robust and inclusive accountability mechanisms and processes to transform the attitudes of law enforcement and socio-legal spaces.

Acknowledging the struggles of Dalit women and girls helps challenge the status quo, caste boundaries and oppressions, and the societal norms and notions that promote systemic GBV. Furthermore, it is equally essential to make healthcare, education, and employment accessible and equitable to Dalit women. This helps create a positive impact in strengthening their sense of identity, agency, and self-esteem. Therefore, from a position of solidarity, feminist groups must honor safe (brave) spaces for collective healing and create critical spaces for Dalit women to share their narratives.