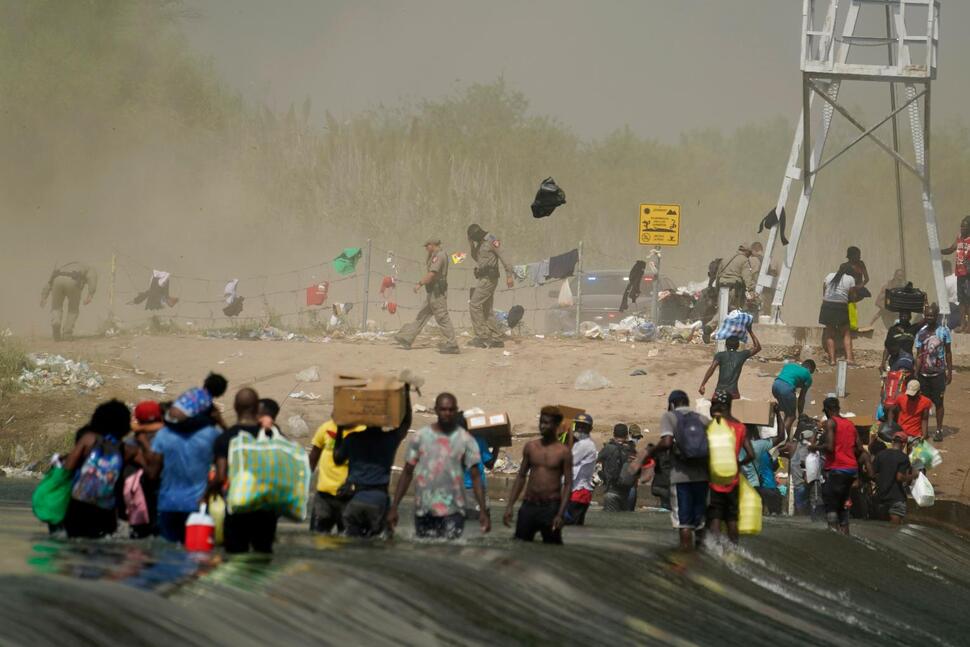 A dust storm moves across the area as Haitian migrants use a dam to cross into and from the United States from Mexico, Saturday, Sept. 18, 2021, in Del Rio, Texas. The U.S. plans to speed up its efforts to expel Haitian migrants on flights to their Caribbean homeland, officials said Saturday as agents poured into a Texas border city where thousands of Haitians have gathered after suddenly crossing into the U.S. from Mexico. (AP Photo/Eric Gay)

We as COFEMinists are in solidarity with Ayiti (Haiti), the Haitian diaspora, and her peoples wherever they are located geopolitically around the world.

We are the Coalition of Feminists for Social Change (COFEM), an advocacy collective of thought leaders, activists, practitioners, and academics working globally to end violence against women and girls (VAWG—also referred to as gender-based violence, or ‘GBV’). Our strength lies in the collective expertise and experiences of our members, who have made significant contributions to advancing women’s rights and ending VAWG in humanitarian and development settings across the world.

As a community, we are concerned with the racist, inhumane treatment, and portrayal of Ayisyen (Haitians) seeking refuge in the Americas (e.g. Chile, Brazil, Panama, Mexico, Dominican Republic, the United States of America, and the Bahamas). The false and dangerous narratives perpetuated about Ayiti and Ayisyen in the media by individuals, countries, and institutions, particularly those in positions of power reinforce misinformation and stereotypes. This year, at the Tokyo Olympics, the world witnessed the abuse and disrespect of Haiti on the world stage during the opening ceremony. Unfortunately, that occurrence is not an isolated event as we again witness the flogging, whipping, and dragging of Haitians at the U.S. border seeking refuge from the ongoing socio-political and economic insecurity in the country, the pandemic consequences that have impacted previous countries they’ve resided in such as Chile and Brazil, and fleeing violence in their native homeland that have also been devastated by compounded natural disasters. This is a stain on our humanity and our refusal to act collectively to speak truth to power makes us complicit in the ongoing crisis in Ayiti and the impact on the Haitian diaspora.

Ayiti is the first Black free republic of the world. Ayiti’s people’s revolution and fight for independence from France through collective power are forever etched in history. Haiti provided hope for Latin American, North American, African, and African Diaspora colonies and a template for fighting successfully against colonialism and imperialism. The myth that Haiti is a cursed country is in fact a MYTH. Haiti is not cursed, instead, its geographical location, sitting on two tectonic plates, the North American Plate and the Caribbean plate, makes it prone to earthquakes. Coupled with this reality is France’s financial abuse of Haiti in the form of payment of $21 billion. This amount was paid by 1947, this payment in addition to the conditionalities of IMF’s Structural Adjustment Programs (SAP) policies in Haiti in the 1980s crippled Haiti’s ability to invest in infrastructure that would have better positioned Haiti to address the critical social, educational, and economic needs of the country; as well as design measures to mitigate and plan adequately for geological anomalies in the regions. In essence, the role of France and the IMF, and other enablers in Haiti’s current predicament can not be understated.

Ayisyen are more than what the mainstream news depicts the homeland as plagued with natural disasters, political instability, kidnappings, and gang violence. Ayisyen are people willing to make sacrifices for hope and dreams although unseen but propelled by this ambition to strive for better futures. At the intersection of the journey that Ayisyen embarks on are the unique risks women and girls face. There have been reports of sexual assaults, physical abuse, and migration-specific hardships that they have to endure through different terrains such as forests, rivers, and unfamiliar landscapes. Some come from Brazil or Chile walking across many countries which places women and girls in potential harm with no forms of protection from police personnel and armies. Women and girls are risking their lives, their physical and mental health at the hands of men who attempt and oftentimes take advantage of their dire situation. The trauma that comes from these encounters impacts their lives.

We at COFEM cannot permit this affront to the basic civil and human rights of Ayisyen. We stand in opposition to the recent decision by the Biden administration to deport Haitians and create a separate and unequal pathway to seeking refuge in the U.S.  We stand in alliance with Ayisyen in Ayiti and in her Diaspora Haitian descent to condemn these inhumane racist policies and decisions that enable the oppressions and impede the human rights of Ayisyen. COFEM demands that the Biden administration reverse policies that infringe on the basic rights and dignity of Ayisyen seeking refugee in the U.S. in accordance with the legal responsibilities and mandate of the U.S. under the 1967 Refugee Convention. We urge a prompt resolution of this grave matter.

We must not forget the international conferences and declarations of statements for women’s rights inclusive of girls’ rights locally, regionally, and internationally have called forth the recognition and protection of human rights. The women and girls from Ayiti deserve to have their rights honored and respected. Equitable treatment and feminist grassroots efforts from the United Nations Convention on the Elimination of All Forms of Discrimination against Women (CEDAW), to the World Conference on Women in Mexico and global women’s marches all represent an inclusive front that is relevant and symbolic regardless of one’s background.

Ayiti has been etched in history as symbolizing liberation and disrupting the status quo and unjustified norms. Ayiti’s path that was set by the sacrifices of its foremothers and forefathers is embedded in the blood of Ayisyens. Specifically, the shereos of Ayiti including Queen Anakaona of one of the original kingdoms of the Taino people who fought against the Spanish colonizers; Cecile Fatimah, who organized the first war council meeting at Bwa Kayiman that set the Haitian revolution in motion; Agbaraya Toya, a warrior from Dahomey, Benin who fought for liberation; Sanite Belair, who fought in Toussaint L’Ouverture’s army, and many more remarkable women.  It should be of no surprise of the remarkable courage and strength that Ayisyen embodies as they march on, seeking better opportunities with dignity.

This statement was written in collaboration with COFEM members:

Elizabeth Louis, PhD (she/her) is a feminist and psychologist based in Boston, MA, USA with a focus on clinical practice related to gender-based violence, trauma, mental health interventions for diverse populations. Her commitment to service is demonstrated through engagement in the Haitian community in the USA, Haiti and abroad. Dr. Louis’ research interests are in global mental health, disaster mental health, and trauma informed practices.

Deborah Chat Dauda (she/her) is a mother/dancer/ educator/activist and a Ph.D. student in the School for Global Inclusion and Social Development (SGISD) at the University of Massachusetts, Boston. She holds Master’s degrees in Public Health (MPH) and African Studies (MA) from the University of California, Los Angeles (UCLA). Her work as a Black Feminist researcher, scholar-activist, and practitioner is dedicated to the flourishing of Black women and girls. Her current research project examines the radical self-care practices of Black women in West Africa and the U.S.

We recognize that at the time when we wrote this statement in Fall 2021, policies and the circumstances of the Ayisyen people may have changed, yet we continually express our solidarity and support for our beloved people.