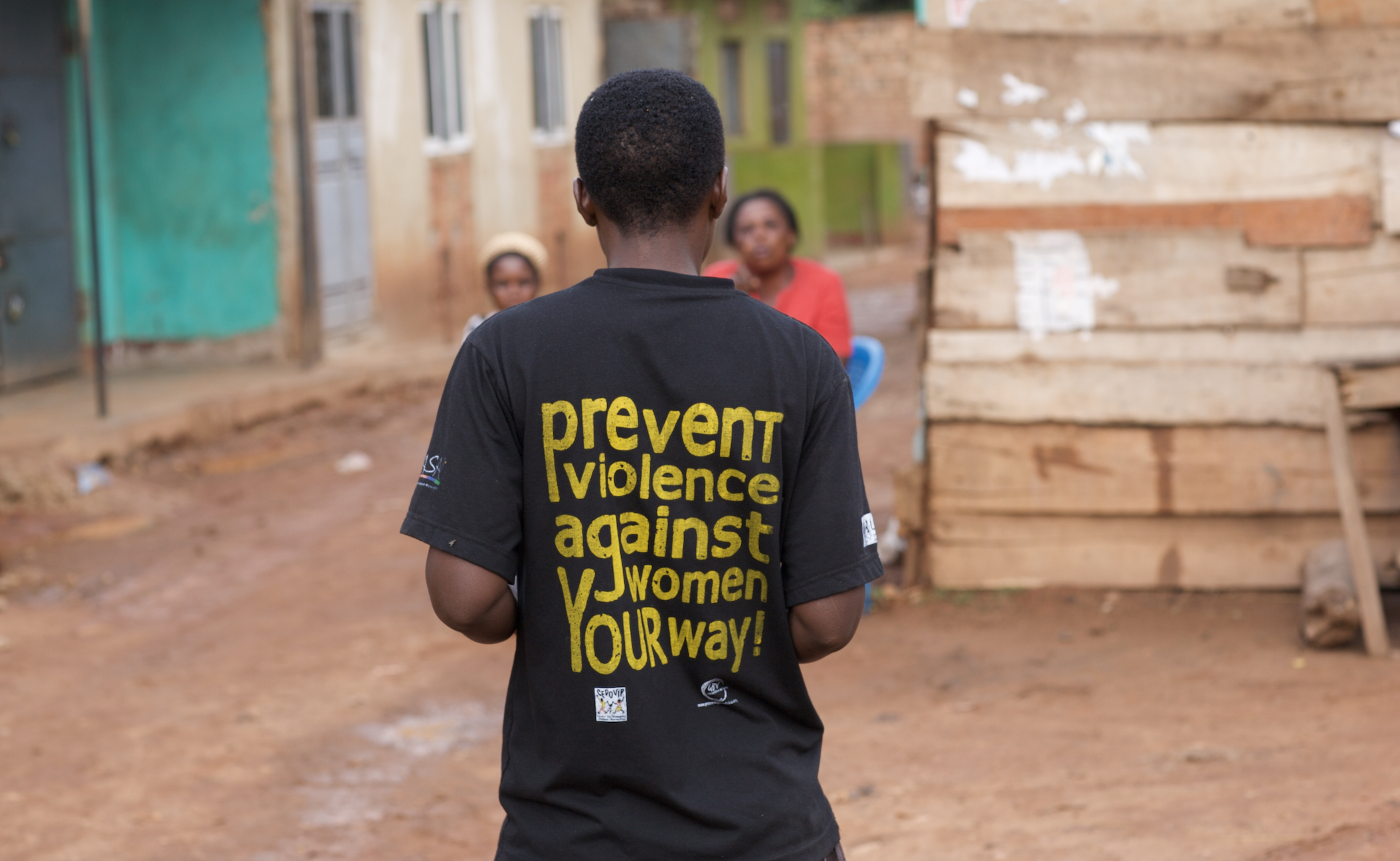 The opening event of the MenEngage Ubuntu Symposium took place in November 2020 and COFEM participated in the Intersectional Feminist Movements Plenary. This plenary was described as being a space where: “Thought leaders and activist voices from women’s rights, feminist, SRHR, LGBTQIA, and other social justice movements (to) share their perspectives on the state of the world, their asks, agendas, and vision for a better future”. Participants were invited to share their view on changes needed for men and masculinities work, as well as advance the discussion around solidarity, allyship and accountability to movements – including women’s rights.

Moderated by Kate Gilmore (Chair, IPPF Global Board), this piece is a post-event reflection on the points raised at the discussion, particularly examining the engagement of men and boys in work around gender-based violence (GBV), and the need to be accountable to women and girls through this engagement.

Two key trends are emerging globally when reflecting on the future of gender equality which are deeply troubling for women’s rights activists working in the space of GBV. Firstly, it is all too common that public discussions or work on GBV are now met with the reiteration that “men and boys face harassment and violence too”. This turns the space into a competitive one and suggests, often without evidence, that violence against women and girls is being overamplified at the cost of acknowledging and/or addressing violence that happens to men. Secondly, in a rush to engage men and boys in this work, some programs have taken attention or funding away from work that is directly responding to the needs and views of women survivors of violence and the importance of centering women and girls in GBV theory and programs. COVID-19 is showing the depth of this inequality and yet the narrative is that it is the “great equalizer” and “doesn’t discriminate” continues to persist at the expense of developing targeted programming and policy.

Ending GBV will require the active participation of all parts of society – including, of course, men and boys. However, this must be done carefully and with strong accountability to women and girls, and leadership from the women’s movement. Reflecting upon this, the idea of ‘fewer principles more practice‘ comes to the fore. It is time we moved from focusing on the principled discussion of ‘should we do men and masculinities work or not?’ and instead look at how to shift the practice of the work being done. This piece highlights three key issues, as well as how and where the transformational shift in engaging men needs to happen.

There is a need to shift the focus from attempting to change the views of individual men to overcoming structural gender inequality. The growing pushback to consider male victims reflects the tendency of (patriarchal) institutions to drift toward male priorities. For example, the European Union (EU) defines gender-based violence as “violence directed against a person because of that person’s gender or as violence that affects persons of a particular gender disproportionately.” This definition uses gender as a demographic characteristic, rather than employing a feminist-informed frame for the social analysis of hierarchy and discrimination based on gender.

The space that was once reserved for attention to, and action on, the violence that women and girls face is now crowded with multiple forms of violence deemed to have any sort of gendered dimension — regardless of whether this violence is grounded in sexuality, gender identity, gender relations or gender norms, rather than inherent, fundamental or systematic gender discrimination and inequality. It is vital that the engagement of men and boys within the GBV space is done carefully and with strong accountability to women and girls, or it runs the risk of perpetuating the same norms it is supposed to be pushing back against.

Lived experiences of women as individuals

It is imperative that GBV work centers around the lived experiences of women, relating to them as individuals deserving of full human rights, and not just in their roles as mothers/wives/daughters. In a rush to engage men and boys in this work, some programs have taken attention or funding away from work that directly responds to the needs and views of women survivors of violence. The importance of centering women and girls in GBV theory and programs falls to the wayside. For example, it has been continually seen with male allies and activists taking up limited space, further reducing opportunities for women and girls to share their voices. We see male activists and gender equality activists gaining funding with the support of organizations like MenEngage to participate in gatherings such as the Commission on the Status of Women (CSW). This is despite the fact that dozens of women leaders of grassroots feminist organizations have been unable to attend at all, throughout  their entire careers, all while it is still feminist activism that has brought about policy changes. Some of these male allies appear on all-male panels as representatives of  “gender equality” work, reinforcing the same structures of inequality they claim to be working to eradicate.

COVID-19 has shown more than ever how in all situations, – but particularly in situations of crisis, there are adverse impacts on women and girls, and yet very little focus, policy and work is done to address these issues. The increased burden and struggles faced by women and girls in this pandemic such as GBV, increased unpaid care work, loss of jobs, etc. is not exclusive to this situation, it is directly tied to existing gender inequalities and structural issues. Where is the allyship, support, and accountability here?

The role of male allies

There is a need for male allies to be guided by and accountable to women at all levels – from the individual through to the organizational and structural. When male allies do not follow or engage with women-led GBV efforts (or worse, assume leadership themselves), they perpetuate gender inequality – the very problem they aim to address.  While self-reflection is important, individual reflection is not enough to ensure accountability to women– this must also happen at organizational and structural levels.

For example, after a series of problematic statements and activities from MenEngage Uganda over a year, a group of 9 feminist organizations and 5 activists came together as an Accountability Group, and a letter was written to Men Engage UG detailing their concerns and calling for action. After 3 months without reply, MenEngage Global with MenEngage UG initiated a survey for more male involvement work in UG. The Accountability group wrote again and when members refused to participate, MenEngage UG finally wrote back. Disappointingly the letter had no substantive actions and placed the responsibility of organizing follow up and accountability on the women’s movement. Yet another letter was required to outline how this was problematic to get a more meaningful, yet still preliminary, response.

Men and boys’ accountability is talked about a fair amount – but not seen in practice and action. The burden continues to lie with women and girl-led organizations to suggest ways forward, point out mistakes, and essentially “clean up” without proactive action from the other side. To be effective, all-male involvement programs and male allies and activists must be accountable to women’s rights activists, women leaders, and women-centered programs and women at all levels of program design, implementation, and evaluation, and implement their advice and concerns during each stage. Male allies should not detract from the limited spaces for women’s leadership and decision-making. For organizations engaging men in GBV work to be truly accountable, there must be consistent critical action, evaluation, and self-reflection, as well as the support of, and bridge-building with, women’s rights movements to enact broader structural change. Women’s voices must remain the focus of male-led GBV work.

Working with men and boys

These are three ways organizations who lead work with men and boys can ensure a lasting and transformational change in this space. They must focus on overcoming structural gender to continue to dismantle the patriarchy. We cannot continue to repurpose it and see no change to gender equality. Women and girls cannot continue to bear the burden of change without the opportunity for their voices to be heard and privileged.

For more information, tips and background on how this can be done at various levels from the donor, organizational, to the individual levels, please see the linked COFEM Feminist Pocketbook Tip Sheets, in particular:

Tip Sheet 2: Why does GBV programming focus on women and girls?

It is time to do the real work of dismantling patriarchy instead of repurposing it for other means.

Written by Sharanya Sekaram. Sharanya is based in Colombo, Sri Lanka, working as an independent consultant in the space of women’s rights. You can find her on Twitter @sharasekaram and on her blog “Writing from That Sekaram Girl”