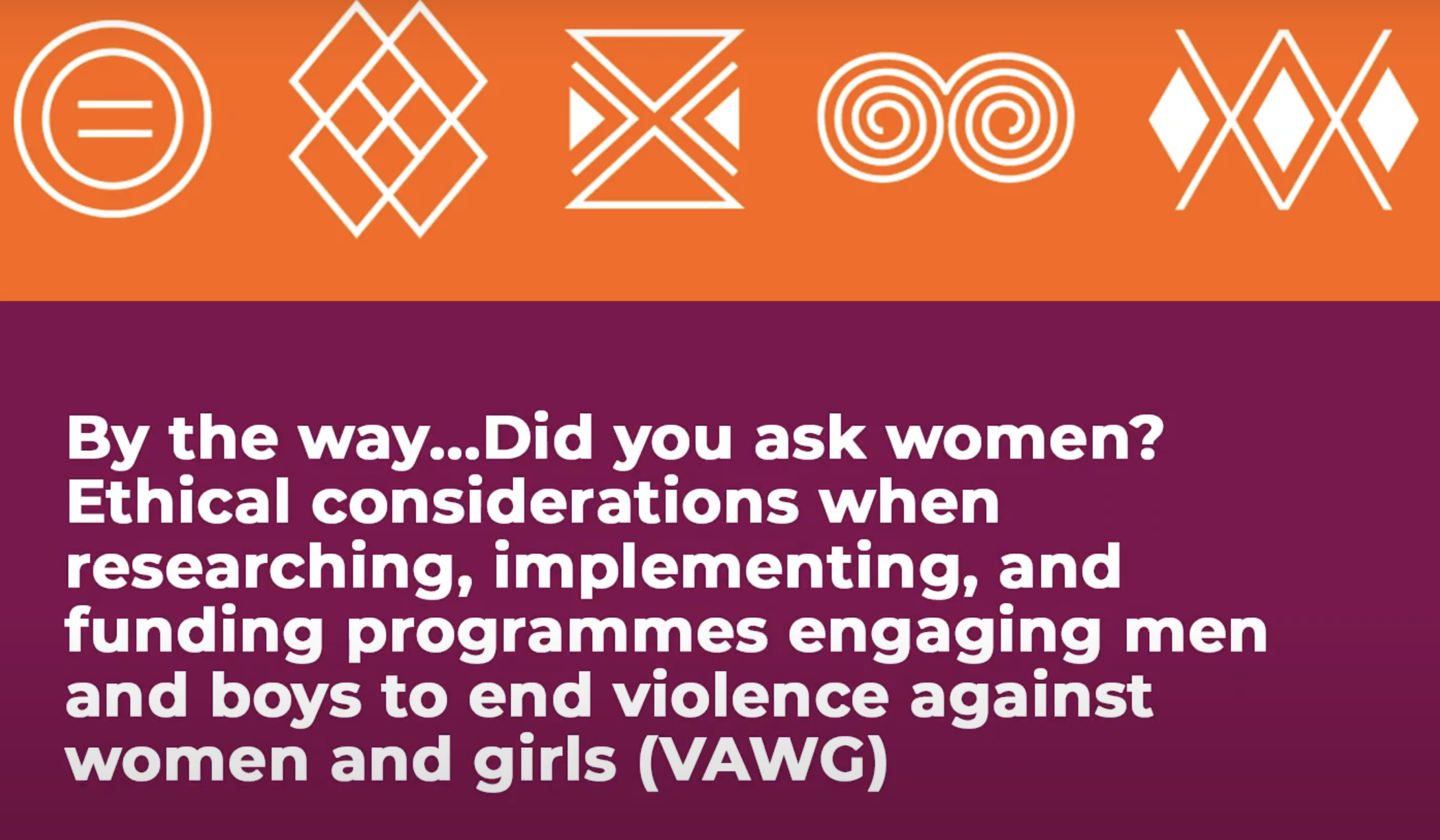 In January 2021, the SVRI hosted a roundtable at the MenEngage Alliance (MEA) Ubuntu Symposium in collaboration with AÇEV, COFEM, IPPFWHR, and SIDA. The roundtable discussed ethical considerations when researching, implementing, and funding programmes that engage men and boys in ending violence against women and violence against girls.

The panel reflected on the following questions:

Accountable and ethical feminist research on VAWG:  What does it look like?

Feminist research is vital to ensure VAWG programming and policies are grounded in women and girls’ realities, and in transformative approaches to preventing and responding to VAWG” – Feminist Approaches to Building Knowledge and Evidence on GBV, COFEM Feminist Pocketbook, Tipsheet 5

Feminist research is action-oriented and focused on the individual, social/systemic, and institutional change to bring about gender equity. Feminist research builds evidence with women and girls to transform the unequal systems and patriarchal structures that oppress women.  By challenging existing power structures, feminist-informed research actively embeds feminist theory and principles into every element and phase of the research process. It requires a level of mindfulness that other forms of research often ignore, mindfulness about privilege, power, and bias.

In practice, feminist research: ensures accountability to diverse women and girls – women are experts of their own lives; challenges traditional methodology and recognizes women as experts and co-producers of knowledge rather than individuals from whom data is extracted; recognizes that power imbalances exist in every step of the research process, and prioritizes ethical and safety considerations – ethics and safety are fundamental tenets of feminist-informed research and are especially vital for feminist research.

What is accountability to women and girls from a donors’ perspective?

“Donors have an obligation to learn from researchers and not think of our programmes in isolation”  – Annika Lysén.

Donors do not work directly with communities. Therefore, they must have a holistic and well-grounded analysis to be accountable. Diverse portfolios are key: supporting different actors provide a holistic approach to end violence and the connection to the bigger patriarchal system. Programmes must work within a feminist framework.

“In a world with a severe backlash against feminism, it is important that policymakers stand up for a feminist approach. I am happy that our former Minister for Foreign Affairs Margot Wallström initiated Sweden’s feministic foreign policy” – Annika Lysén.

There are detrimental patriarchal structures that embed violence, and therefore it is not enough with prevention programs and only “engage” men and boys. Understanding the systemic nature of gender-based violence makes it clear that gender transformative work with men and boys must be about systems change at institutional and ideological levels and efforts to change individual men’s attitudes and behaviors.  Accountability also means making funding decisions based on evidence. Violence prevention programs cannot be a field of good-will but a field of relevant, strategic, and well-understood programs that give concrete and lasting results.

Accountability to women and children entails support to researchers in low- and middle-income countries, as they are experts in understanding the context in which violence takes place and they can see programs in a holistic way – not only the programs as such, but what are the reasons for success or not success.

What does accountability and ethical research on VAW mean? Decolonizing knowledge, subverting power

Power and resource imbalance in the production of knowledge is still prevalent. Available data shows a world where resources for research – in all fields – are abundant in the Global North, but remarkably scarce in the Global South: UNESCO Science Report: towards 2030.  Accountability to women in research on VAW means decolonising knowledge production and promoting research that uses intersectional positioning and analysis. Decolonising knowledge entails identifying, amplifying, and advancing a research agenda on key gaps in knowledge and practice where the vital voices of practitioners, activists and researchers from the Global South are heard. In this regard, the SVRI and the Equality Institute are facilitating a consultative process to develop a Global Shared Research Agenda on VAW in LMICs. Crucially, it also means increasing the research and research resources in these settings.

“We must put our money where our mouth is – is all good to talk about decolonizing knowledge but without sufficient resources to conduct ethical research on VAW ad VAC in LMICs, the power of dictating research agendas, of deciding which research is valid, of which language is used to publish; of whose names go in academic publications will remain where it still is – in the North. Research is not a luxury; it is a need for accountable and effective programming to end VAW & VAC, including programmes engaging men and boys” – Angelica Pino

The SVRI runs a Research Grant Making Programme imbued with feminist principles: collaborative, responsive to the needs and context of women from LMICs; supportive of ethical research that puts women and communities at the centre of the research; facilitating partnerships and knowledge sharing and exchange; and focused on actionable research. These tenants have been carried forward by SVRI grantees, building evidence on programmes engaging men to prevent violence against women and violence against girls in  Africa and Latin America.

How can researchers conduct ethical research and be accountable to women?

Doing feminist research on SRHR issues and on VAW cannot but be anti-racist and anti-ableist. Much of what we know and what is defined as “robust research” comes from institutions and systems as patriarchal, colonizing, supremacist, and discriminatory, as the very violence that affects women. Doing feminist research is about power, equality, justice, and non-discrimination.

“The organizations of the Global South are fighting in this process of decolonizing the generation of evidence. As part of an intersectional feminist ecosystem and committed to amplifying the voices of women and girls, we must actively advocate for economic justice, in which decision-making and investment of resources in research is guided by principles of justice and social protection, instead of reinforcing privileges” – Susana Medina Salas.

Feminist principles allow researchers to acknowledge their subjectivity and, in fact, assumes that subjectivity adds value, as they can weigh the effect that their views have on the evidence produced. Methodological decisions should be inclusive of the most vulnerable people, not just because it is important to have these voices, but also because participating in a study constitutes an act of thinking about oneself as having the power to share personal knowledge.

“Doing feminist research is putting women and girls at the center and dismantling the multiple forms of violence that impact their lives; this is an act of political defiance, because like them and local activists and organizations, researchers face the fury of authoritarian and anti-gender movements.” – Susana Medina Salas

Every research product is the result of collective construction, accessibility, and innovative dissemination to communities, and collective spaces must be ensured beyond traditional institutions.

How can programmes engaging men and boys be accountable to women?

Fatherhood initiatives should adopt consolidated perspectives on the issue of gender equality, and it is important to reinforce these perspectives in their discourses and activities such as designing an event. For example, AÇEV’s fatherhood implementation and advocacy efforts in Turkey have now come to a phase where there is truly local ownership of involved fatherhood programmes through local grassroots movements. The programme supports increased awareness for fathers’ responsibility in household duties, childcare and development, and it is now discussing its impact with women rights organisations.

“We now deem it very important to have an active, ongoing conversation with the women’s NGOs with a vision of remaining accountable to feminist principles. It is now possible for women’s rights organizations and local fatherhood initiatives to come together on issues such as the Istanbul Convention, abortion, alimony, gender equality and violence against women. The collaborative atmosphere achieved will enable an increased coordination of civil actors working towards gender equality in Turkey” – Suna Hanöz-Penney

Simple programme implementation does not solve issues of parenting programmes as contributors to gender equality. Research-based advocacy is essential to show accountability to women, to spouses and implement good programmes. Research has also demonstrated the need for long-term programmes to make a difference. The involvement of the private sector is also essential.

Using the strategy of engaging men and boys as allies in the struggle to end violence and achieve gender equity cannot be done in a vacuum or as a standalone silver bullet. Feminist approaches and ethical considerations should guide how we fund, implement and research violence against women and violence against girls’ programmes, including those targeting men.

The concept of decolonising knowledge must be a top priority for donors in high-income countries (HIC), where power and resources lie. The knowledge generated by researchers in low and middle-income countries (LIMCs) needs to reach donors to influence governments and programmes on VAW. However, donors should be wary of interpreting research with a ‘HIC mentality’ that can perpetuate colonisation and dictate agendas in the South.

Programmes need to include the actors whose behaviour we want to change as allies. Programmes involving men, such as parenting ones, need to have active and on-going conversations with women’s rights organisations to stay accountable to feminist principles.

As the motto of this symposiums goes – Ubuntu, I am because you are – we must continue striving for diversity, partnerships and collaboration to end VAW. – Elizabeth Dartnall

Share with us your insights on how to engage men and boys to end VAW and VAG in an accountable and ethical way. E-mail us at: svri@svri.org

Pino, A., Dartnall, E., Sulaiman, Z., Medina, S., Hanöz-Penney, S., Lysén, A. (2021). By the way…Did you ask women? Ethical considerations for engaging men and boys to end violence against women and violence against girls. SVRI Blog.